My mother and father grew up in the little town of Amite, Louisiana, but they never took my siblings and me to New Orleans for Mardi Gras.   (Can’t imagine why)  My first chance to see a Mardi Gras parade took place in Alabama.  It was Mobile, Alabama to be exact.  I’m embarrassed to say I thought New Orleans and Galveston, in my home state of Texas, were the only places to hold Mardi Gras celebrations.  Now, I know better.  Do you think there might be other stuff going on in America that I’m not aware of?  Anyway, I now feel certain that many places have parades- just not as far North as Amarillo, Texas.

My ignorance runs even deeper.  I thought Mardi Gras was maybe a week of parades and balls.  Sorry, my friends, this is wrong.  In Mobile the first parade of Mardi Gras is in November.  During the three weeks before Fat Tuesday, the town holds parades almost every night.  And the locals do it right each night.  I was there on a random Tuesday and the floats were beautiful.  The high school bands that played between the floats were energetic and talented.  I imagine this was not the first parade they had marched in over the last few weeks but they didn’t disappoint. 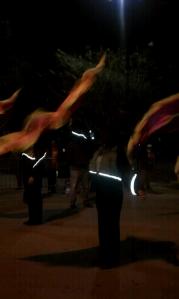 Amateur float makers everywhere, we need to hang our heads in shame.  We have parades in my little town and we have an awesome band but our flat-topped trailers covered in hay bales and brightly markered posters would be laughed out of the Mobile parades.  The one picture of a float that I took (below) shows you what I mean.  These are well thought out designs and they don’t use the same floats night after night.  I’m guessing there are hundreds of floats housed all over Mobile year round as they prepare for Mardi Gras season. 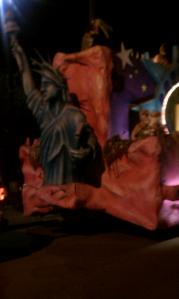 Next let me tell you about the gifts tossed from the floats to the waiting crowds.  You know about the beads and doubloons but do you know about the stuffed animals, roses, candy, peanuts and Moon Pies? Yes, I said Moon Pies.  In 1956, Alabama float riders started sharing Moon Pies with the crowds.  I didn’t even know these treats still existed.

And what do you collect your goodies in?  Many parade goers have wheeled boxes.  Sacks don’t work well because the torpedoed goods come quick and you need somewhere to toss your items as you prepare for your next catch.  Seasoned parade goers have rakes to collect goods that don’t clear the protective three-foot fence.  The plastic bags from the local grocery store that we use for our little parades would never hold the plethora of loot recovered on a Mobile Mardi Gras night.

Now you understand why I didn’t get a lot of pictures.  You look down and you might be sporting a bead imprint across your face the next day.  And the night I went, it was ladies throwing the gifts from high atop the floats. 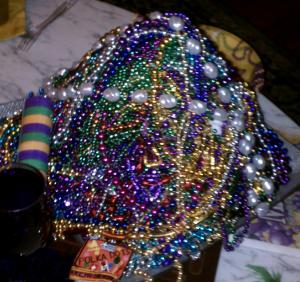 I feel like I stumbled upon a well-kept secret.  I went to a Mardi Gras parade and I didn’t have to fight Time Square sized crowds.  I didn’t even have to flash anything to get beads.